Leland Holiday paints on boards.  They are bright, magical, and as soon as one comes in the door, out it goes!

We love Leland’s sense of color and play.

The Navajo Indian reservation is home to many amazing creatures.

One of them is called The Howler.  It is a mysterious being believed to have killed dogs and livestock. Elders in the community call these predators Skinwalkers, and others call it the Navajo version of Bigfoot, particularly news people.

The reservation even has a special law enforcement agency that only responds to paranormal reports such as ghosts, witchcraft, UFOs and even Skinwalkers, or if you prefer, Bigfoot.  (Nah, nothing like a Skinwalker…)

Allison is one of the few men in Utah, or in any part of the Navajo Nation, who is a weaver.  Traditionally a woman’s art, Allison talks about how he learned (from his grandmother), and when he learned –when he was nine years old.

Allison is a terrific storyteller, and listening to a rare person is always, well, a rare treat. 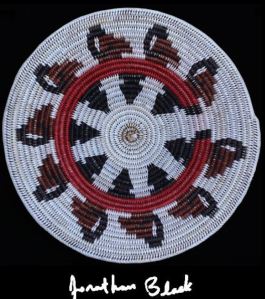 Navajos have many forms of protection from people, events, and spooky beings. So, we at Twin Rocks, thought we’d start sharing a few tips with you, and show you art that’s been created to boost the protective energy.

The word “ambush” has a pretty interesting beginning.  The word itself is an old word that means a shelter that’s formed by two trees or shrubs whose branches intermingle. Thus, it’s a good place to lay in ambush for someone, or to keep from being ambushed.

This leafy ambush is a setting that occurs repeatedly in myth. And, from the ambush, people have learned or invented protective rituals including herbal magic, frames, hoops, pokers, prayersticks, and pieces of carved wood.

A hero, hoping to shoot a ram or other animal that he did not recognize as a god, lay behind the ‘ambush trees.’ When the animal appeared, the hero was numb until it had passed. If the animal turned out to be a god, it would reveal himself as a deity to the hero. Then, the god would begin to teach the hero ceremonial lore and wisdom. In the once-were-coyote episodes, the intertwined trees become a shelter for the hapless hero who was bewitched into becoming a coyote.

The ceremony, or chant, to cure this is called Hoops of the Night Chant. The hoops are made of the ambush woods, which appear again in the pit-baking, and they’re associated with the wood samples of a healing herb.

In this remarkable basket woven by Jonathan Black,  the rams offer protection from deities who might be waiting to ambush an unsuspecting person.  Thank you, beautiful rams! 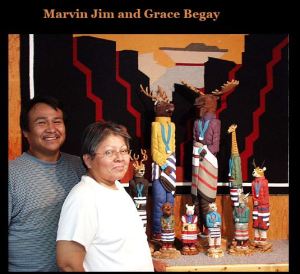 Based upon the Navajo Creation Tales, the extraordinary and unique sculptures of Marvin Jim reflect a time long ago, when animals and humans walked and worked together to create this new world.Traditional Navajo stories speak of conversations among all beings, of behaving in a manner of mutual respect, and of all beings having an equal position in the community. These legends are an essential part of the Navajo culture.

The tales are of universal interaction, compassion and tolerance — all the things necessary to live a balanced existence.

The animals played prominate roles in these myths. For example, Coyote is often portrayed delivering fire to humans, a selfish act initially, but one that proved selfless in the end. There was Turkey who kept his wits about him during the great flood. When everyone else grabbed  personal possessions, Turkey gathered life-giving seeds. These seeds made it possible for the people to survive.

The four great rams who dispersed the flood waters into a mirage world, making the earth livable are mentioned. Duck, who dove back into the troubled waters to fetch the forgotten medicine bag of First Man is also an important part of the stories. This act cost him his beautiful plumage, but gave rise to the sacred mountains which guard and protect the people.

Marvin has chosen to recreate these lessons through sculpture. Raised in the traditional Navajo way, this talented young artist, carves his “upright animals” to show that there was once, and will be again, a personal connection to the animal world.

There is a special grace and love in his work that make you feel happy.  Isn’t that a miraculous thing?

The Tree of Life — Interview with Navajo Weaver, Rena Begay, Master Weaver of Tree of Life

The Tree of Life is one of the most unique and interesting among Navajo myths and legends.

It is the story about where the people came from and their beliefs in the progression and movement of life.  It also sings about their connections with natural surroundings and the involvement of their gods in daily life.  It is the story of who the Navajo people are today and the rhythm of their lives.

Most Tree of Life weavings have a stalk of corn in the center.  And, at the base of this stalk, there is a symbol for the emergence of the people into this world.  It is a story about the center of life.

Is it any wonder that it is beautiful?

Bugs are about who the Navajo people were in the first creation story. Butterflies represent personal creativity, and birds are our  connection with the gods.  Flowers are our way of remembering that life is beautiful, and a climbing vine refers to the upward moving way.

These are simple, gorgeous images woven in wool that recall our most basic hopes, wishes and needs.   Look closely at this rug… Remember that life is good and smiles upon us all.  A true miracle.