The Tree of Life — Interview with Navajo Weaver, Rena Begay, Master Weaver of Tree of Life

The Tree of Life is one of the most unique and interesting among Navajo myths and legends.

It is the story about where the people came from and their beliefs in the progression and movement of life.  It also sings about their connections with natural surroundings and the involvement of their gods in daily life.  It is the story of who the Navajo people are today and the rhythm of their lives.

Most Tree of Life weavings have a stalk of corn in the center.  And, at the base of this stalk, there is a symbol for the emergence of the people into this world.  It is a story about the center of life.

Is it any wonder that it is beautiful?

Bugs are about who the Navajo people were in the first creation story. Butterflies represent personal creativity, and birds are our  connection with the gods.  Flowers are our way of remembering that life is beautiful, and a climbing vine refers to the upward moving way.

These are simple, gorgeous images woven in wool that recall our most basic hopes, wishes and needs.   Look closely at this rug… Remember that life is good and smiles upon us all.  A true miracle.

Creating the World Takes a Lot of Energy

Hosteen Klah, wonderful Navajo storyteller and keeper of the Old Stories, referred to the Creation Myth and Changing Woman:

“Great Water of the sunset… When all the Indian tribes had been established on this present earth, the Sun said to Changing Woman, `Your work here is finished.  You may now go to the place of the sunset, where, far out over the great waters, I have built a house for you. I will send powerful guards with you — the Hail, the Thunder, the Lightning, and the Water Ruler.

“‘The Wind, the Rain, the Clouds, and the Light have helped me make a beautiful house for you, and I wish you to live where I can meet you in the evening.’

“This house was built on a beautiful island called `Land that Floats on the Water.’ In it were four rooms and on each was on floor.  And, for each floor there were ladders of black jet, white shell, turquoise, and abalone on all four sides. On top of the house there was a multicolored thunderbird, larger than any that has ever been seen, who was the chief of all thunderbirds.

“On his back he carried small thunderbirds of all the ceremonial colors. In the center of this palace was a large room with an altar decorated with all the colors of every flower that had bloomed and faded on earth, and with the spirits of all the birds. The main entrance was toward the east and was guarded by a white-shell rattle which gave the alarm whenever a visitor approached.

“To this place Changing Woman came to live forever and meet the Sun in the evenings.” — Hosteen Klah, Navajo Medicine Man and Sand Painter.

A nice rendezvous home for a woman who had done her work well and deserved a nice second place to live! 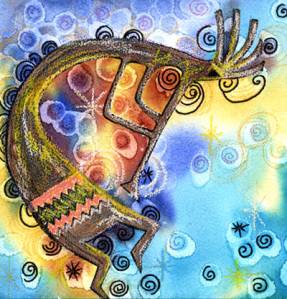 Kokopelli, Wooing Women of the Southwest

Kokopelli was a frisky and fruitful guy.  As a matter of fact, you could say that he was the Johnny Appleseed of the Southwest.

His trade route was large.  He played his music and spread his seed from Southern Utah to Mexico. To the Navajo, Kokopelli is called “Water Sprinkler”, and he is a symbol of fertility in both the natural and human sense.

To the Hopi he is the symbol of the Flute clan, and he adorns pottery, baskets, and Katsinas. And, he is always surrounded by humor. This funny-looking being, with his back hunched, carrying seeds, was somehow able to enchant women into loving him and mesmerize men out of their most prized possessions.

Many women considered it to be an honor to be chosen as his “dreamtime companion” when he stayed in a village until he moved on. If you’d had trouble having a baby, Kokopelli would take care of that. He fathered children left and right.

Kokopelli has the spirit of the Trickster. This hunchbacked flute player is sometimes called the Casanova of the Cliff Dwellers.

His image was cleaned up hundreds of years ago by Catholic priests as they arrived in the Southwest. But, he is still here, etched in petroglyphs, playing his flute for everyone to enjoy.

We believe that Kokopelli is with us still, just beyond our reach but inside our dreams, and that he will continue his journey and trade route into the future.

Oh, magical southwest… We love you.

Here we’d like to share with you a wonderful story, for stories jumped to life at the same time as paintings. This is the Navajo story of First Horse.

“When the Holy People first made the horse, it was a complete thing, but it would not come to life.  They tried to get it to rise up on its strong legs, but it would not rise. Caterpillar was asked to help. ‘How can I help?’ he asked.

“’You know,’ one of the Holy People said, ‘where the sacred flints are kept.’”

“’Yes, this is true. But I am pretty slow getting around.’”

“Then the Holy People prayed over Caterpillar and he became Butterfly. Swiftly he flew to the Mountain Where Flint Is Kept. After gathering four flints, he returned to the Holy People and put the flints into the hooves of the horse.

The great horse stirred, quivered, and came to life. Then it surged, leaped fully into life, struck the air with its hooves, and galloped off into the clouds.

“’Look,” a Holy Person said. ‘The horse makes the marks of Butterfly when it dances on its hooves!’ And it has been that way ever since.”

Navajo people believe that there are Five Horses of the Sun Father. And, they believe that they are a way of telling time, Navajo-style. White shell and pearl horses represent dawn, turquoise is noon, red shell is sunset, and jet or coal is night.

(Twin Rocks Trading Post would like to acknowledge the book: An Ethnologic Dictionary of the Navajo Language, 1929; The Franciscan Fathers.)

Stop in at Twin Rocks Café. (You might be able to pick up a copy of the Father’s book.) After you’ve enjoyed your Navajo Taco, stroll out the door and down the path to the Twin Rocks Trading Post. We’d be happy to share paintings by L. Holiday with you – they’re a favorite at our southwest gallery.

Enjoy this day of horses and all things mystical and beautiful!